Instead of a traditional keynote, 10 speakers were each asked to do a 3 minute talk.  Here were the people and the big ideas. 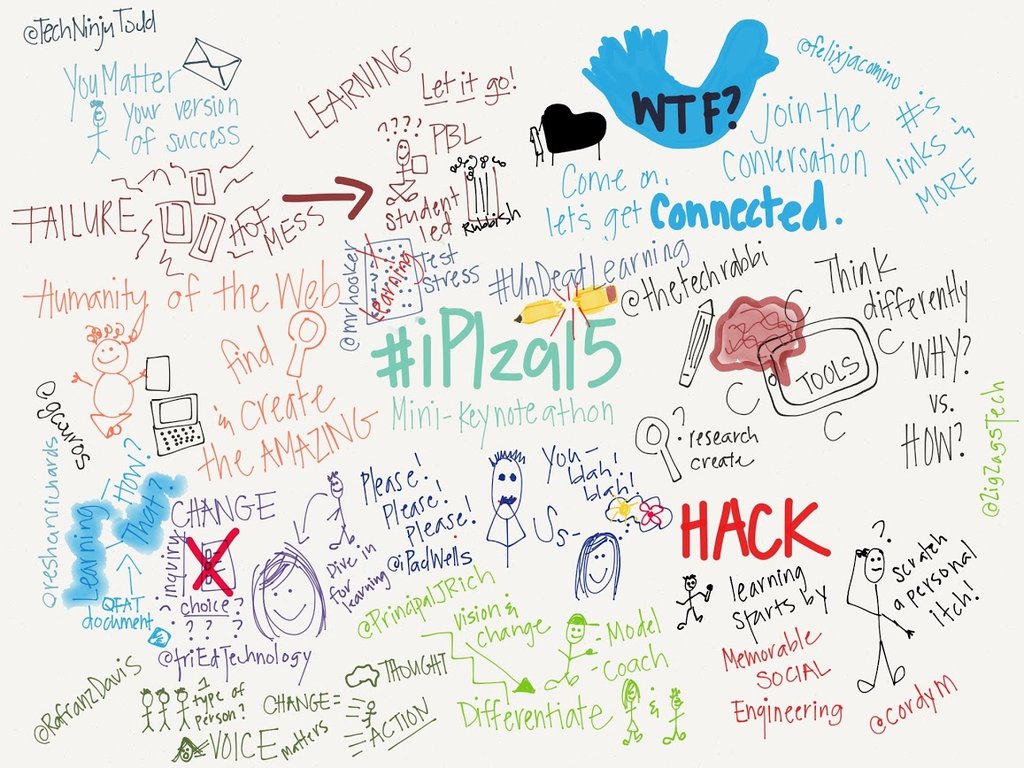 Sketchnote by Meghan Zigmond ~ used with pride and permission!

You can see Adam flying his drone, as well as a wonderful overview of the entire event in this iPadpalooza Highlight video.

Adam Bellow’s opening keynote really hit on a lot of 2015 trends: coding, fear of failure, sharing, risk taking and drones. He geeked up, as we like to do in edtech, especially when he flew a drone programmed by Tickle.  His emphasis was on people over shiny things, even though he talked about technology gadgets and apps and services. His putting-people-first message was post App, post idevice. His keynote was centered on being connected to each other and the importance of sharing. By highlighting how quickly the new tech becomes old, he brought a freshness to the people-and-pedagogy-first message.  Student engagement has been a big selling point and focus for edtech evangelists, but he points out that the superficial engagement of new hardware and software is fleeting. Bellow reminds us to focus on the people, the connections, and the learning.

1) innovators learn to ignore naysayers  a.k.a. “BOZOs”
2) costumers can’t always tell you what they need
3) it’s not about the current curve
4) design matters
5) big challenges beget BIG CHANCES
6) less is more
7) changing your mind is a sign of being smart
8) value does not equal price
9) “A” players hire “A+” players
10) the perfect combination to market and sell anything: maximize uniqueness and value
BONUS: some things need to be believed to be seen.

You may have seen Eric Whitacre’s Virtual Choir, if not, take a look.

This was an outstanding, life enriching, keynote. Having a passionate knowledgeable person walk you through something they love is a profound experience.  Eric Whitacre talked about how he got into music, the virtual choir, his process and stories of music and composers. It was an hour of magic.

My favourite phrases and quotes:

When talking about hearing choir music for the first time:

On being a composer:

I also especially liked how he talked about how all music, all songs, have a ‘Golden Brick.’ The golden brick is a simple piece of the song that is the anchor of the song, speaks the emotional essence of the piece and often repeats throughout.  He had us listen to Beethoven’s 5th Symphony.

He explained how the “ba-ba-ba BOOM” was the Golden Brick of this piece. Here he is watching the visualization and pointing out the brick as it repeats.